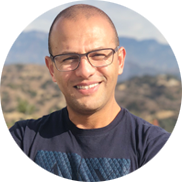 Why Use a Kubernetes Deployment?

In another article, we discussed Kubernetes ReplicaSets. ReplicaSets, however, have one major drawback: once you select the pods that are managed by a ReplicaSet, you cannot change their pod templates. So for example, if you are using a ReplicaSet to deploy four pods with NodeJS running and you want to change the NodeJS image to a newer version, you need to delete the ReplicaSet and recreate it. Restarting the pods causes downtime till the images are available and the pods are running again.

A Deployment resource uses a ReplicaSet to manage the pods. However, it handles updating them in a controlled way. Let’s dig deeper into Deployment Controllers and patterns.

Let’s have a quick demonstration of what Kubernetes Deployments can do. The following Deployment definition deploys four pods with Apache as their hosted application:

Save the above in a file. In this example, I named the file apache_deployment.yaml. Apply the definition to the cluster by running the following command:

Notice the use of the --record flag at the end of the command. While not required, this is a good practice that you should follow. The --record flag saves the command that issued the deployment in a list. Later on in the article, you’ll see the value of keeping this information saved. In a few seconds, you can check the status of the pods by running kubectl get pods. You should see three pods running.

Let’s have a look at the definition file that we used to bring those pods up:

So far, everything our Deployment did is no different than a typical ReplicaSet. The real power of a Deployment lies in its ability to update the pod templates without causing application outage.

Let’s say that you have finished testing the Apache server version 2.4, and you are ready to use it in production. The current pods are using the older Apache version 2.0. The following command changes the deployment pod template to use the new image:

The above command changes the image tag of the containers named apache to use the image httpd tagged 2.4 instead of 2. An alternative way to achieve this is by editing the deployment configuration YAML directly using a command like the following:

Then, scroll down till the pod template part and change the httpd image tag. Once you save the configuration, the Deployment starts updating the pods one by one. You can see the actual progress of this operation by issuing the following command:

The output shows the update progress until all the pods use the new container image.

The algorithm that Kubernetes Deployments use when deciding how to roll updates is to keep at least 25% of the pods running. Accordingly, it doesn’t kill old pods unless a sufficient number of new ones are up. In the same sense, it does not create new pods until enough pods are no longer running. Through this algorithm, the application is always available during updates.

You can use the following command to determine the update strategy that the Deployment is using:

The output looks as follows:

We used grep here to filter out the command’s output to reveal how it updates the pods. If we remove the filter, we’ll find some valuable information about the deployment steps. Let’s see:

Let’s double check that we have two ReplicaSets created for us by running kubectl get rs. The output should be similar to the following:

The old ReplicaSet has no pods, while the new one has all four pods.

If you want to use the rolling update strategy, you needn’t specify any parameters in the definition file. However, you may want to fine-tune how Kubernetes handles the transition of old Pods to the new ones. For example, Kubernetes automatically decides that it needs to keep at least 75% of the pods available. That is, only 25% of the pods (one out of four, for example can be down during the update process). If you want to override this behavior, you can add .spec.strategy.type as follows:

By setting the maxUnavailable parameter to 50%, I want Kubernetes to bring down as much as half the running Pods during the update. This number can either be a percentage or a whole number.

The Recreate strategy will bring down all the old Pods immediately and then start the new one. This will obviously cause downtime. However, sometimes it is necessary. For example, if you discover a serious security flaw in your application and you need to immediately switch to the new patched image. You don’t need any of your clients to use the old vulnerable version as this may negatively affect your business reputation. A Recreate deployment strategy is required here even if it brings the application down for a few moments. Perhaps you can display a friendly “under maintenance” message till the update is done. 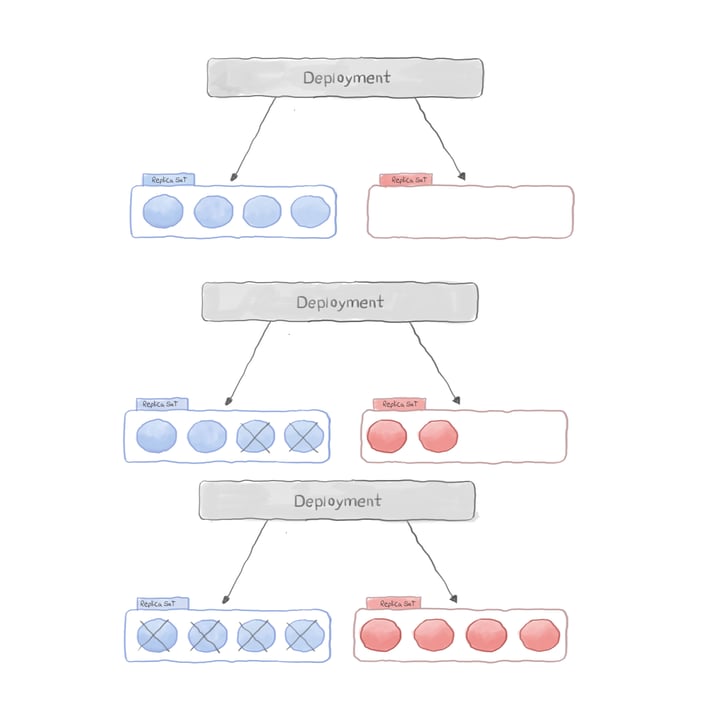 There are other types of deployment strategies that engineers may need to use. At the time of this writing, the Kubernetes Deployment only supports the rollingupdate and the recreate strategies. However, with the help of other controllers like Services you can achieve more complex scenarios like:

Updating a Deployment While Another is in Progress (Rollover Updates)

As soon as the Deployment controller detects a change in the pod template (i.e., an update), it creates a new ReplicaSet and starts rolling out the pods to that new ReplicaSet until it moves all of them. However, sometimes, you may want to issue a new update while the existing one is still in progress. Let’s have an example.

Suppose you are updating ten application pods to version 1.1 (image myapp:1.1). And, while the update is in progress, the QA team informed you that they’d just finished testing version 1.12 and its ready for deployment. So, you decide to interrupt the running update and go ahead with the latest version (image myapp:1.2). Behind the scenes, the Deployment was using a new ReplicaSet and had already moved three pods to use the myapp:1.1 image when it detected a new deployment request. It immediately creates another ReplicaSet, kills the three pods that moved, and starts scaling up the newest ReplicaSet with pods using myapp:1.2. In other words, it does not wait for the whole ten pods to finish upgrading to myapp:1.1 then begin migrating them to myapp:1.2. Instead, it aborts the existing operation and starts the new one right away. Such an operation is called rollover update, and it is a powerful technique to ensure that your pods are always in the desired state in the shortest time possible, and with no downtime.

Undoing a Deployment (Aka Rolling Back)

Kubernetes deployments allow you to roll back updates. There are many scenarios when you want to undo a change. Let’s say that customers started complaining about a bug that was not detected during the QA phase and, hence, you need to get the application back to the previous version until the bug gets fixed. For example, let’s say that we decided to use Nginx instead of Apache for your web tier. You issued the following command to make that change:

In a few moments, all the pods were using Nginx as their web servers. Then, you realized that there are performance issues with the application, and clients are starting to complain. You need to configure the pods to use Apache again. There should be no downtime in this rollback process.

The Kubernetes Deployment controller keeps track of every Deployment that has been made (up to a configurable limit). Kubernetes considers changes in the pod template only and keeps them in history. If the change was, for example, scaling up or down the number of running pods, it does not count as a record.

Back to our example. To rollback the Deployment to a previous one, you need first to list the last changes. The following command outputs the deployment history:

You should see the following output:

The change-cause contains the command that was issued and caused the change. If you didn’t use the --record flag, this field would equal None.

To rollback the latest Deployment and return to the previous state, run the following command:

Kubernetes Deployment starts a process similar to what it used when upgrading the pods to Nginx. In a few moments, all the pods are running Apache again.

Sometimes you may want to rollback to a specific deployment. Let’s say that you made an upgrade from httpd image 2.4 to 2.4.39 before changing to Nginx. You want to revert to using httpd:2.4. That’s two deployments back. You can specify the exact revision number you want your Deployment to rollback to by using the --to-revision flag. For example: 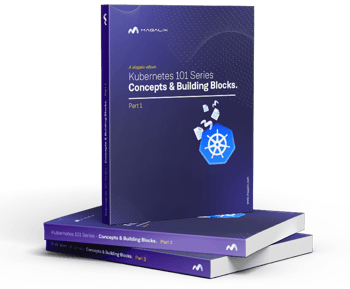 Since Deployments use ReplicaSets internally to manage pods, they too support scaling up or down. Let’s scale our apache-deployment to run six pods instead of four:

If you check the pods now using kubectl get pods, you’ll see the Deployment is creating two more pods.

You can also use Horizontal Pod Autoscaling (HPA) to automatically increase or decrease the number of pods in a deployment based on the CPU load on the node. The following command