Mohamed Tawfik
Find me on:
LinkedIn

Helm is a package manager for Kubernetes applications. Kubernetes has grown tremendously over the past few years, and so has the ecosystem to support it. Recently, Cloud Native Computing Foundation (CNCF) has announced Helm as an incubating project that demonstrates its growing popularity among Kubernetes users. It uses a YAML file form called Charts. Charts are used to describe, install, and update Kubernetes. They are a prototype sort and they support even the most complex Kubernetes applications. Charts are built to be easy to produce and maintain, and can be exchanged and used for Kubernetes publishing.

We'll explain the basics of Helm and show what a powerful tool it can be for working with Kubernetes resources. 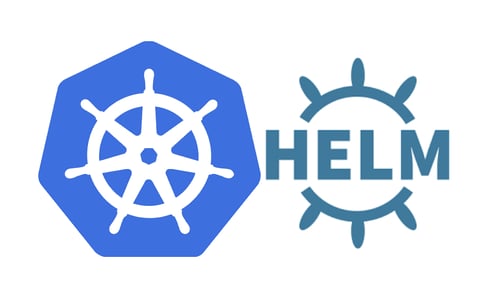 What Are The Benefits Of Using Helm With Kubernetes?

Helm helps us to build a framework for clearly defined microservices, and manages our scalability needs (up or down), and assists in adding more Kubernetes nodes and pods to the cluster as needed. Instead of working with a holistic image, and increasing resources, you are running only a necessary set of images, and independently scaling them up.

What Are The Prerequisites For Installing And Using Helm?

The following command can test your connectivity:

If you see no errors, you’re connected to the cluster. If you access multiple clusters with kubectl, be sure to verify that you’ve selected the correct cluster context:

In this example the asterisk (*) indicates that we are connected to the do-nyc1-k8s-example cluster.

First, we're going to install the Helm command-line utility on our local host. Helm provides a script that will handle the MacOS, Windows, or Linux installation process.

Change to a writable directory, and download the GitHub repository script from Helm:

Make the script executable with chmod:

You can use your favorite text editor at this point to open the script, and inspect it to make sure it's safe.

If you're satisfied with it, run the following:

Packages of Helm software are called charts. Helm comes pre-configured with a collection of curated charts called a stable. In their GitHub repos, you can search all of the available charts. Next, as an example, we’ll be installing the Kubernetes Dashboard.

Use Helm to install kubernetes-dashboard from the stable repo package:

Note the line NAME, highlighted in the output of the above example. In this case the name dashboard-demo was specified. That is our release name - a Helm release is a single one-chart deployment, with a specific configuration. With that map you can deploy several releases, each with its own configuration.

If you don't use the —name to specify your own release name, Helm will create a random name for you.

For a list of releases on this cluster, enter the following:

Now we can use kubectl to check the deployment of a new service on the cluster:

The helm upgrade command can be used with a new or updated chart to upgrade a release, or to update the configuration options.

The kubernetes-dashboard chart provides a configuration option for fullnameOverride control of the name of the service. Let's upgrade to helm with this set of options:

You’ll see output that’s similar to what we received after the initial step of installing Helm.

Check to see if the updated values reflect your Kubernetes services:

So, it's clear that the name of the service was updated to the new value.

"Are you facing monitoring issues? get a bird's eye view &Understand infrastructure trends drill down into the right level of details with just 2 clicks.

4. Rolling Back a Release

We created a second modification of the release when we updated our dashboard-demo release in the previous step. Thankfully, Helm retains all previous release details in case you need to roll back to a previous configuration or chart.

To inspect the release again use the helm list:

The column on REVISION tells us that this is now the second update.

To roll back to the first revision use helm rollback:

You should see the following output, indicating that the rollback succeeded:

At this point, you’ll notice that the service name changed back to its previous value (if you run kubectl get services again). With the configuration of revision 1 Helm re-deployed the application.

Helm releases can be deleted with the Helm delete command:

Although the release has been deleted and the dashboard application no longer runs, Helm will save all the revision information (in case you want the release to be re-deployed). If you were trying to install a new dashboard-demo release right now, you would have an error.

If you use the --deleted flag to list your deleted releases, you’ll see that the release still exists:

Use --purge flag with helm delete command to really delete the release and purge all old revisions: