Implementing A Reverse Proxy Server In Kubernetes Using The Sidecar

Implementing A Reverse Proxy Server In Kubernetes Using The Sidecar

What is a Sidecar?

A sidecar refers to a seat attached to the bicycle or motorbike so that they run on three wheels. The sidecar is often used to carry a passenger or equipment. There are many uses for the sidecar in sports as well as the military. Regardless of where you want to use the sidecar, the concept is the same: an object that is attached to another and, thus, becomes part of it. The auxiliary object’s main purpose is aiding the main one.

What is The Kubernetes Sidecar Pattern?

From the above definition, we understand what a sidecar is and what it is used for. In Kubernetes, we have the sidecar pattern, which makes use of one of the most powerful components of Kubernetes: the Pod. Among the important features of a pod is that containers hosted on the same pod share the same network address and filesystem. All containers on the same pod can connect to each other through the localhost address the same way processes communicate with each other over HTTP on the same machine. Therefore, we can create a pod that hosts the main application, through the application container, and add a sidecar container on the same pod that provides an extra layer of functionality. Like the sidecar seat, containers on the same pod are treated as one unit: they’re created, destroyed, and moved from one node to another together. So, what are the possible uses of the sidecar pattern? There are many. For example, we can add a sidecar container to our application pod that runs Nginx. With Nginx at our disposal, we can add an HTTPS layer to our application that natively supports HTTP only. Another use case is providing a frontend reverse proxy for uWSGI applications (for example, Python Flask), which is the topic of this article.

We have a very simple API that is built using Python Flask microframework and the Gunicorn server. The application is hosted in a container, but we need a web server in front of it. The web server receives the HTTP request, routes it internally to the application pod and relays back the response to the client. You might be asking what’s the use of a web server here and why not just use Flask? Here’s an excellent Reddit discussion that’ll probably address your questions. For the moment, here is a depiction of what our architecture looks like: 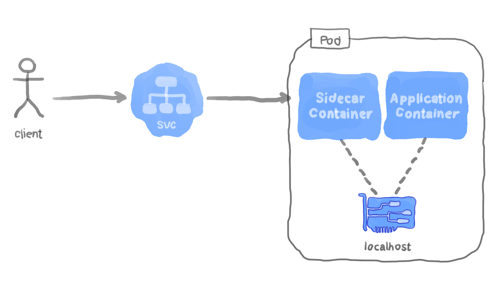 GitOps is a standardized workflow for how to deploy, configure, monitor, update and manage Kubernetes. Learn how to automate Kubernetes with GitOps.

Next comes the Dockerfile:

You may want to test this locally on your machine first. This can be done by building the image:

And then run the container from the image:

Then, you can confirm that the API is working by issuing an HTTP request (using any client). In this lab, we’re using curl:

The Kubernetes Deployment And Service

Before applying our deployment, we need to push our Docker image so that it’s available for Kubernetes:

Now, we can combine our Deployment and Service in one file (let’s call it deploy.yml):

So, now our service is listening for connections on port 32001 (on any of our nodes) and relays the connection to one of the backend pods (we have two replicas) on port 5000. The Deployment creates two pods, and each is hosting a container using the magalixcorp/sidecar image.

We can test our setup so far by issuing an HTTP request to the IP address of any of our cluster nodes on port 32001:

Since everything is working fine now, you may be asking: why do we need a reverse proxy? The answer is simple: because Gunicorn is not a web server. It can be thought of as an application server. The web server is needed for several reasons. For example:

So, now that we know some of the merits of using a web server, let’s add one. In this lab, we’re using Nginx so the key file that you want to change is nginx.conf. The contents of this file should be:

The file simply instucts Nginx to serve content by default from /usr/share/nginx/html and any dynamic content (any calls to /api) from localhost:5000, where our Flask application is running. Now, let’s add some static content starting with the index.html page:

And the required JavaScript to make the AJAX call can be found in the script.js file:

As you can see, we tried to make things as minimalistic as possible so that we concentrate on the more important stuff. The page just displays a header followed by the content dynamically retrieved from the backend API.

Let’s dockerize the whole thing. Our Dockerfile should look as follows:

Nothing complicated, just the Nginx configuration and the static files. Let’s build and push this image:

As a matter of fact, we made two changes: instructed our Service to connect to the pod at port 80 instead of 5000. Since our pod is now hosting two containers, and since containers on the same pod share the same network, then connecting to a pod on port 80 is analogous to connecting to the container that is listening on port 80 (nginx). The second change we made was adding that container to our pod (lines 34 and 35).

Now, let’s apply our modified configuration to the cluster:

Lastly, we can test our work using any web browser and navigate to one of our IP addresses on port 32001:

In this article, we discussed the Kubernetes sidecar pattern. You can use this pattern whenever you want to delegate the extra functionality needed by your application to a separate container rather than a separate pod. Throughout the lab, we explored one of the possible use cases for using a sidecar container, which is adding a web server in front of an application server.

Perhaps the main advantage of using the sidecar here is that you can easily replace Python Flask with any other application server (e.g., NodeJS, Go, Ruby, etc.) as long as it listens on the same endpoints and follows the same business logic. You can find the source code of this lab here https://github.com/MagalixCorp/sidecar